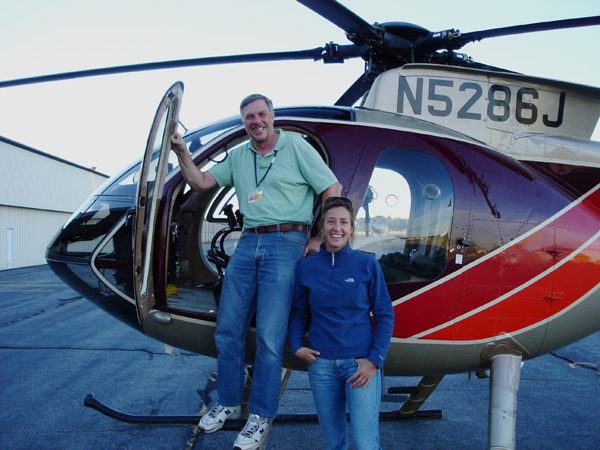 Training to become a Helicopter Pilot

If you are thinking about getting your helicopter license, there are a few things you may want to know first. Most people who decide to get their helicopter license break down into one of two categories. Someone who holds no pilot rating at all, or someone who holds some sort of fixed wing rating. Of course, there is the occasional balloon pilot, or other exotic, but these are quite rare.

People who currently do not posses any type of pilot certificate

If you hold no rating at all, you will need to take 20 hours of instruction and log 20 hours of solo practice. Generally, however, it will take you closer to 45 hours of dual instruction before you are ready for your checkride, giving you closer to 65 hours total time in helicopters, if you are an average student.

Before you can take your checkride, you must pass a written exam. These days that pretty much means going to a computerised testing center. The test is multiple choice, there are study guides available that give you the answers, and passing grade is a 70. Piece of cake.

Assuming you pass your written test, and your flight instructor thinks you are ready for the checkride, you will be signed off to take a combination oral and flight test with either an FAA examiner, or more likely a Designated Examiner who is a person who does not work for the FAA, but has been designated as having enough experience to judge whether you make the grade or not.

The length of the exams are pretty much up to the examiner. Supposedly you will only be tested on subjects called out in the "Practical Test Standards" (which you should get a copy of) but in reality most examiners use that as a bare minimum and will ask you plenty of questions that are not in the PTS. One to two hours of oral exam and an hour of flying is pretty typical for the designated examiner we send most of our student pilots to.

In general, you should plan on spending 40 hours of dual and 15 hours of solo to get your helicopter add-on. Probably 98% of our add-on students do it plus-or-minus 5 hours from that figure.

How to pick a school

The first thing is to find all the schools, and visit each one. Start with the yellow pages. Some schools don't advertise. Find them by calling all the airplane schools and aircraft charter companies, and ask them who does helicopter training in the local area.

To visit each school, call them up and make an appointment to meet with the owner/president. You will usually have an easier time getting an appointment during the week, rather than on the weekend. Tell them you'd like to meet them to hear about the school, their training program, and why you might want to train with them.

Meet with the owner/president, look the facilities over, look the aircraft over, get at least the following information:

After the tour, thank everyone for their time, leave, and write down pertinent information. Organize it with any materials they give you, and go through the same process at each of the schools you've located.

When it comes to making the final decision, first of all make sure you are comparing apples to apples. Don't price shop two schools and compare FAA minimum rates to "typical" rates. Compare minimum to minimum or typical to typical. Generally an FAA Part 141 approved school will be better organized than a non-141 school, but this is only a very general guideline. However, a non-141 school should have a syllabus showing lesson plans, number of hours, etc. I'd be wary of a school that didn't have a syllabus. If the school's insurance company doesn't waive subrogation, you could be responsible for the entire worth of the helicopter if there is an accident during training or rental. Factor in the price of renter's insurance when you determine cost of flying at that school.

Try to determine whether the helicopter fleet is being well maintained. In my book, maintenance is much more important in helicopters than it is in airplanes. There are a lot of pieces that can fall off an airplane and leave it flying. There are not nearly so many pieces in a helicopter. Of course, it can be very hard for someone who doesn't know about helicopters to determine whether the maintenance is good at a particular school. All I can say is talk with some of the current students and specifically ask them about maintenance. Look the helicopters over. If a lot of little stuff isn't being fixed, that may mean that big stuff isn't being corrected either. However, it's no guarentee either way.

Try to figure out whether this is a school which soaks it's students. I've seen many schools that take 100 hours or more for people to get a private pilot license. You will find the occasional person who really needs to take this long, but if you talk to 3 graduates and they all took over 80 hours to get their private, the school may be "overtraining" them in order to get additional revenue. A private pilot certificate should normally take between 55 hours total time for an airplane pilot to 65 hours total time for a non-pilot. If the school average is much more than that, they are probably gouging their students for extra revenue.

Most important is to talk to some of their students. This is where you will get some honest opinions about the school. Obviously you won't get much information out of a pilot who's only been flying there for a couple weeks, but students who have already soloed will be good sources of information. Ask direct questions about whether the student thinks it's a good school, who are the good instructors, is the maintenance okay, and what things are bad about the school. Obviously the school isn't going to point you toward someone they know to be dissatisfied, but even taking this into consideration, the students are much more reliable sources of information than the schools employees or the schools competition.

How to select an instructor

Probably one of the most important resources during your flight training will be the instructor. I'd rather train with a good instructor at a bad school, than with a bad instructor at a good school! The instructor is the person you will be spending all the time with. How many hours you will take to train (and therefore how much it will cost), and how good a pilot you will be ultimately depends on the instructor. It's worth your while to select a good one. That said, keep in mind that full time instructors often move on to other flying jobs as they reach 1,000 to 2,000 hours of experience. There is no guarentee that the instructor won't leave part way through your training, so select a school you can live with if the instructor of choice leaves.

As for whether you should be looking for a high time grizzled old veteran, or a fresh CFI, that is a very difficult question to answer. More experienced instructors may be burned out, or less enthused than a low time instructor. On the other hand, a more experienced instructor will probably be able to train a better pilot in slightly less time. Still, I have met high time instructors who have been doing it for quite a few years that are just terrible, and fresh CFIs who are fantastic. There are no absolutes. This is why you need to talk to the students and recent graduates; they have the best idea of who the good instructors are, and who to avoid.

How much will it cost?

This varies greatly. In the United States, in a Robinson R22, you should figure on about $12,500 for a private pilot license. You will find schools that promise it to your for less, but this is a realistic amount to budget for. If you want to compare prices, don't compare their package prices, or what they say the license will cost. Simply compare their hourly prices for the machine and the instructor. That will eliminate the schools that quote ridiculously few hours to get your license. The $12,500 figure was arrived at by multiplying 45*(the dual instruction rate) + 20*(the solo rental rate).

One thing to think about is that most people looking for a school will price shop based on quoted rates. But the real determining factor will be how good the instructor is. A disorganized instructor can cause you to take longer than a good, organized one. At $185/hr or more for dual instruction, it doesn't take many hours of wasted time before that instructor has cost you thousands of dollars. My suggestion is not to pay too much attention to the exact prices, but evaluate based on whether you like the people, and what their reputation is with their customers.

Can I get a loan to finance my training?

This is a subject I don't know a lot about, but one of my students recommended this website as a way to track down aviation educational loans.

If you find similar resources let me know and I'll add them to the list.

Paul Cantrell paul at copters.com (replace " at " with "@" to email me - this avoids SPAMMERS I hope)